Citra Asia Raya was established by Hok Hie and Irwan on the island of Batam. This company specializes in the processing and recovery of hazardous waste, mainly from electronics (E-Waste). The nation of Indonesia, with a population of nearly 300 million people, produces a large amount of electronic waste, from computers and printers, to televisions and phones. Beyond being difficult to transport and dispose of, these retired items are also often harmful to the environment, needing to  be expertly transported and handled in a safe manner that does not result in air pollution.

Aware of this need, Hok Hie and Irwan founded PT. Citra Asia Raya with a vision to provide an easy, safe, and environmentally friendly solution for handling the vast amount of electronic waste produced both locally and nationally every year.  The first step that these founders took on their path of bringing this vision to reality was to seek the appropriate legalization and licensing from the national government.  This type of business is no small scale venture, requiring much investment in the establishment of a processing plant in order to maximize working capabilities.  After much effort working with the national government, specifically the Environmental and Forestry Ministry, PT. Citra Asia Raya received their full licensing for handling all varieties of electronic waste throughout the whole of Indonesia.

Having established an effective work management system, as well as continuing to maximize their environmentally friendly utilization process , PT. Citra Asia Raya received full licensing and support from the Enviornmental and Forest Ministry of the Indonesian Government.  PT. Citra Asia Raya has succeeded in expanding their business since their establishment on Batam Island until now, founding another company on the island of Java.

PT. Citra Asia Raya endeavors to support the Environmental Conservation efforts of the Indonesian Government through the participation in and encouragement of the recycling, recovery, and handling of hazardous waste, because through this, the Earth’s Natural Resources can be conserved for future Generations.

We take pride in discovering and providing solutions to unsolved problems.  We are committed to creating integrated solutions for every problem related to handling hazardous electronic waste, from transportation to processing.  We are committed to fostering both creativity and innovation that will continue to improve our service to both our customers, as well as to the environment.

Confidentiality is a high priority of ours when dealing with the sensitive information stored on customers’ retired electronic items.  Our secure storage facilities, guarded checkpoints, and professional CCTV systems help to foster a high level of trust and accountability between us and our customers.  We endeavor to give our best efforts in protecting and prioritizing the important interests of our customers in all that we do.

We appreciate doing things the right way, from providing detailed reporting, to apprehending the appropriate operational licensing for our company.  We believe that business must be run in-line with current governmental laws and regulations.  We endeavor to give accurate reports and information that our customers can trust, because we know that our customers play an immensely important role in the success of our business for generations to come.

Our company’s tagline: “Recycling Today for a Green Generation Tomorrow,”is not merely a cliché phrase, but a philosophy and worldview that we are committed to live and operate by.  We do not only manage electronic waste for business, but we do it to better ensure a safe and healthy environment for generations to come.  In light of this, our waste management process, from transport to finished recycled product, utilizes environmentally friendly systems and technologies that help us to truly live up to our ambition to be Green. 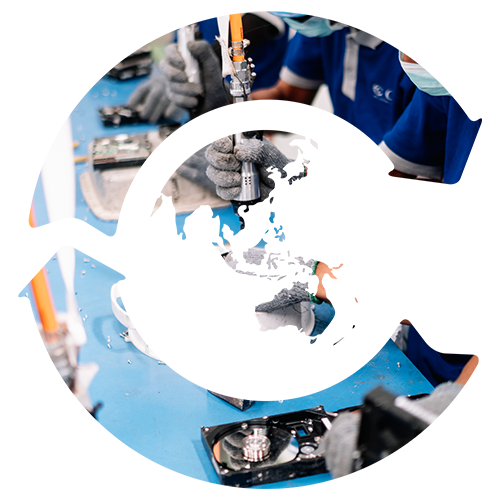